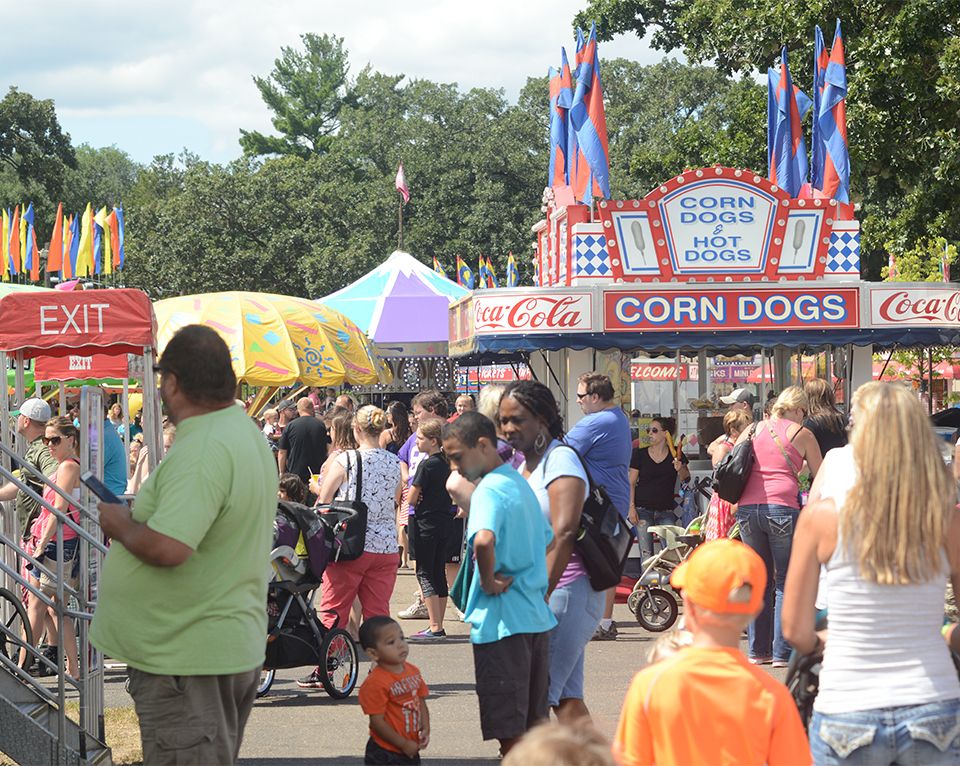 SAUK RAPIDS – Wednesday was a solemn day for Sauk Rapids summer events.
Announcements came that the Benton County Fair and some remaining Rapids River Day events are canceled due to concerns of the COVID-19 pandemic.
The fair was slated for Aug. 4-9, and the annual Rapids River Food Fest and Tanner’s Team Foundation walk-run events were hoped to take place June 27.
“There is no way we can try to pull off an event at the end of June if the fair is already canceling its event in August,” said Kathy Phenow, Rapids River Food Fest co-chair. “We as a committee agree there is no way for us to distance everyone safely in the park. We can’t have the festival and have it safe for everybody there.”
Phenow said Tanner’s Team Foundation postponed its event prior to the decision. 2020 would have been the 10th annual walk-run event. The foundation plans to host the 10-year celebration in 2021.
As of May 8, the Minnesota Strongman events are scheduled as planned June 27. According to its Facebook feed, the event will not have bleachers, but the public is welcome to attend at their own risk and provided they are not ill or showing symptoms of any kind. Social distancing is recommended.
Phenow said the committees are looking forward to 2021.
“We can’t wait for next year to be bigger and better,” Phenow said.
The Benton County Agricultural Society came to its decision to cancel the six-day Benton County Fair at its May 19 meeting.
According to Al Stemper, president of ag society’s board of directors, the board considered information from the Minnesota Federation of County Fairs and the International Association of Fairs and Expositions prior to its decision.
Soliciting volunteers, obtaining supplies like hand sanitizer and paper products, and financial stability all played a role in the board’s decision to cancel.
“We’ve got a lot of judges and many of our volunteers who are older,” Stemper said. “And so, would there be enough people to come in and do this? That certainly was one of the big things.”
Stemper said he was unsure whether civic groups who normally aid the fair’s operations would be available and that socially distancing people throughout the fairgrounds would be a problem.
“It’s virtually going to be hard to separate people in high-traffic areas like our beer garden or the children’s barnyard where we are very, very packed.”
Stemper said the fair board weighed the risk of operating a fair that could cost the same amount as other years but could potentially bring in reduced revenue. He said the fair would pay the same amount for entertainment and other attractions whether they have a full house, half-crowd or quarter-crowd participation.
“One of our final talking points was our financial condition,” Stemper said. “Because we did have a productive and good fair last year, we are in a position where we are still looking good. We are going to have to limit our capital improvements and basically cut back on most spending for improvements this year, but we came to the decision that we could probably come ahead better by not having the event and incurring the expenses while taking the chance that we only get a small participation.”
The early decision allows the fair board to communicate with vendors and attractions two months prior to opening day.
“We’re trying to move forward and give our vendors and our people coming in a chance to know, ‘Hey, now we can plan accordingly,’ and, you know, work with them,” Stemper said.
The board has not yet made a decision as to whether 4-H judging events will occur in August. All in-person events for the University of Minnesota Extension, which oversees 4-H, are canceled through June 30.
“Once the university and 4-H gives us some ideas, I think we can move forward with that,” Stemper said. “As they are done through June, … that’ll buy us a little time to see what their ideas are and maybe toss some thoughts about what can or cannot be done.”

Where To Find...
Current individual counter copies are available Tuesday mornings for $1.00 at Coborn's, Little Duke's, Speedway, Brenny Oil Company and Casey's in Foley and at Pojo's and Gilman Co-op Creamery in Gilman.